The smell of freshly baked bread may have positive effects, including making us nicer to strangers.

According to the Daily Mail, researchers at the University of Southern Brittany in France found that shoppers were more likely to alert a random passerby that they had dropped a belonging if, at the time, they were also passing a bakery giving off the sweet scent of baking bread. Published in the Journal of Social Psychology, suggest certain odors can trigger a positive mood that can lead to a greater degree of altruism, or unconditional concern for the welfare of others. 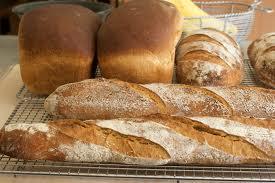 “They found that shoppers were more likely to alert a passer-by that they had dropped a belonging if, at the time, they were also passing near a bakery giving off the mouth-watering aroma.”

How did it work?

As confederates (or people working with the study) walked a few feet in front of a shopper, the confederate dropped a glove, handkerchief or packet of tissues.

Two observers stood about 20 metres away. The experiments – which were repeated up to 400 times – found that when the volunteers dropped the items outside the bakery, 77 per cent of passers-by stopped and helped recover the lost items and hand them back to their owner.

Outside the clothes shop, only 52 per cent of strangers helped.

What does it mean?

“Our results show that, in general, spontaneous help is offered more in areas where pleasant ambient smells are spread,” they said.

“This experiment confirms the role of ambient food odours on altruism.”

The researchers suggest that other smells widely regarded as pleasant could trigger similarly benevolent behavior. 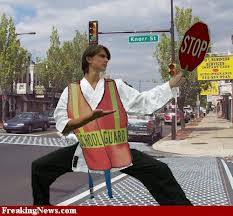 Like this only without the stop sign or karate stance… and not in the middle of the road.

So of course, we found that people were more likely to stop when someone was near the stop sign and even more likely with a vest recording what they did.

Further, doing some research on the actual paper…

“…the effect of pleasant ambient odor on spontaneous helping has never been tested.”

And that’s just what I found in a 10 minute search without even going into those articles’ bilbiographies.

Also, Guéguen didn’t assess mood in his new study the original study regarding bread.  Being an observational study there is no way to control for the “participants” or to examine their motivations.  There is no way to tease out whether there was a difference between the psychology of the type of people found outside of the bakery vs outside of the clothing store.  There is no control for the type of pleasant smell either.

And perhaps that bothers me the most. The media is jumping on this as “smell of bread will make you kinder”.  While the research suggests that any pleasant smell puts you in a pleasant mood which may make you more likely to be helpful to someone else. In fact, Guéguen’s own research over 10 years ago regarding perfume suggests just that.  In that study, people were more likely to help pedestrians who dropped something if they were wearing perfume.
There’s also no discussion of the setting, was either location more crowded or at a dead end of the mall?  Were there more people surrounding them?  Was there different music?  Any number of contributing factors could have affected the behavior of the customers observed.

Things that I believe we discussed in our final psych paper and that I know I required my students to account for… freshman and sophomore undergraduate psychology students that could have figured out the problems with this paper.

But I suppose it makes for an interesting story to share at the dinner table.